I seem to be doing well enough running the Kenwood B2000 at 5W or the TenTec 1320 at around 4 watts, but I haven’t made many contacts with my Rockmite, which on a good day puts out around 250+ mW, but less when the battery runs down a bit. A while back, I had ordered the Texas Topper (a.k.a. Tuna Topper) amplifier (nominally 5W out) from www.QRPme.com. For $25 it’s a good deal. The design lends itself to flexibility and experimentation, allowing the user to choose whether to use onboard/offboard options, a tuna-shaped round or altoids-shaped rectangular form factor, a range of input powers (using fixed or variable attenuator, if necessary), fast/slow switching, and transceiver or xmtr/rcvr configuration.

I put the kit together last week, made an enclosure, stuck it in, connected everything up, and … nothing. Well, not quite nothing. My WM-2 wattmeter read about 50mW output. Not good — the amplifier was doing something, but not in the direction that I had hoped.

The amplifier is well-documented on Chuck Carpenter’s website, which provides a parts list, pictures of the board, schematics and helpful advice. From the circuit diagram, it’s apparent that there are two halves to the pc board — one that controls switching through a relay, and the business end of the amplifier that centers on a MOSFET followed by a filter network.  As far as I could tell, nothing was shorted.  In the “receive” state, signals fed straight through from input to output connectors. When I keyed down the rockmite, I could hear the relay click in, and I was able to verify that the input signal was being appropriately routed over to a 4:1 transformer to feed to the MOSFET. 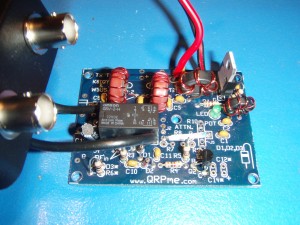 I checked DC voltages with a DVM, and verified that the bias voltage (determined by the forward voltage drop across an LED that conveniently also serves to let you know power is applied) was 2.05V. The voltage on the MOSFET’s metal tab (the drain) was about the same as battery voltage, as it should be.  Unfortunately, I didn’t have an RF probe on hand for tracing of RF voltages — the probe was lost in the last move. It would be easy enough to build one (see nice plans on W5ESE‘s site), but I didn’t have a suitable diode on hand and apparently Radio Shack no longer carries the 1N34 in stock. No problem — I have something better, although not quite as portable: an oscilloscope.

The incoming signal was about 8Vpp, and 4Vpp after the 4:1 input transformer. I expected to detect something on the drain of the MOSFET, but all I got was hum (maybe just background).  Probing beyond the MOSFET, I didn’t get much. I was stumped at this point, and starting wondering if I had done something wrong during construction.

It seemed to me that there were two likely places that I could have screwed up — in winding the two bifilar transformers (which, I recall I did while watching an episode of “No Ordinary Family”, so maybe I was distracted), or maybe in installing the MOSFET. I had placed a mouser order at the same time as the kit order, so I had a couple extra MOSFETs to play with. Using static-free everything (mat, wrist band, soldering tip, etc) and low heat, I replaced the MOSFET. No change. The kit comes with 22 and 26 gauge red magnet wire for winding toroids. To be extra careful, when I rewound the two bifilar transformers, I used on strand of red, and a strand of another color. Radio Shack does carry a magnet wire set, which conveniently includes 22, 26 and 30 Ga lacquered wire, and the 22 is gold and the 26 is green. The transformers look much better when wound with two color wire, and it’s easy to verify at a glance that the correct wires are tied together and that they all end up where they should. Again, though, no change.

I tried replacing the MOSFET one more time, as I thought that perhaps I had not had the right load on the amplifier when I tested it the first time, but again, no change. 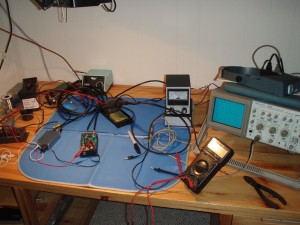 After  I looked at the data sheet for the FET and noted that the gate threshold voltage is listed as a minimum of 2v and max of 4v. The transfer function graph showed the drain current picking up sharply above 4v. My rockmite has lower output than most, and it occurred to me that I might be at the lower end of this amplifier’s design — not enough umph to drive the FET’s gate. To up the bias voltage, I stuck a 1N4148 diode between the stock LED and ground. This bumped the bias from about 2V up to 2.75V. Result: 1.5W output. On the oscilloscope, the waveform was a bit distorted on the FET’s drain, but smoothed out in the filter and was well formed at output.  Going from 250 mW to 1.5W is somewhere around 7dB gain — not quite the 10 dB gain typical for this amp, but a huge improvement over my rockmite’s usual output.

So, now I am playing around a little to see what happens when I run this system with a fully charged battery and play a bit with the bias voltage. Hopefully, I’ll have a chance to try out the rockmite-on-steroids this weekend.

This site uses Akismet to reduce spam. Learn how your comment data is processed.

Hi – I’m Jack, a medical researcher who bounces here and there around the planet. This blog is devoted to hobbies items like amateur radio (call sign 5B4APL), electronics, computers, and interactive fiction.